Listening to Rachmaninoff's Isle of the Dead
Rachmaninoff
music
September 3, 2019 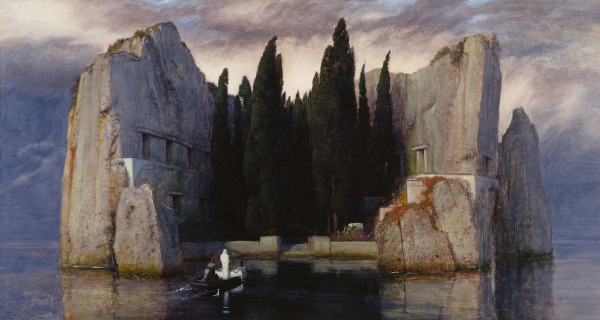 This piece, probably one of Rachmaninoff’s darkest, is – as it’s called in the business a tone poem or symphonic poem. Tone poems aren’t necessary based on poetry (this piece is about a painting, not a poem), but the idea is rather that the piece has a subject: a painting, scene, folk story, or an actual poem, that it tries to evoke or express in musical terms. Contrast it to something like Beethoven’s fifth symphony, which is just music in and of itself, not referring to any explicit extra-musical subject.

Rachmaninoff wrote it after seeing a painting of the same name, by the Swiss painter Böcklin. Printed reproductions of the panting were so popular throughout Europe that Nabokov was led to comment on its ubiquity:

“The modern style,” he said at length with disgust and passed to its neighbor, which he began to examine with the same conscientious attention, although it was but an ordinary print found in every Berlin home: “The Isle of the Dead.”

Böcklin actually painted five versions of the same scene, my favorite one being the one at the top of this page. Another one only survives as a black and white photograph reproduction, which is the one Rachmaninoff saw. He was so impressed that he felt impelled to write this eponymous piece of music. Afterwards, however, when seeing another version, in color, he was pretty disappointed, saying he would probably never have written the piece had he seen the colored version. Ouch.

The painting depicts a rowing boat approaching a desolate, craggy island in the middle of a sea or lake. Aboard the boat are stately figure in white, taken to be the soul of someone deceased, and a person rowing the boat towards the island, often likened to Charon from Greek myth, ferrying the souls of the deceased across the river Styx, into the underworld. So, big surprise, this piece is going to be about death. Lots of grim, gloomy death.

Before getting into the actual piece, there’s a bit of classical music culture from back in the day you would have to be aware of, before actually fully understanding what’s going on. Namely, the Dies Irae; you’ve probably heard of the name at one point or another. It’s a medieval hymn from around the 13th century that is traditionally played during a Requiem mass. It’s become a bit of a Romantic music trope to use the first phrase of the hymn as a formulaic way to evoke death. This tradition was started by Berlioz in his Symphonie Fantastique, another tone poem in which the composer imagines himself, driven to despair by an unrequited love, attempting suicide by consuming copious amounts of opium. This causes him to fall into a delirious halucination in which he is executed at the guillotine on charges of killing his love. He then witnesses a grotesque sabbath feast of witches and spirits, accompanied by the Dies Irae.

Rachmaninoff used it in countless pieces (what can I say, he was a gloomy guy), and, as you might have guessed, it’s going to feature heavily in this piece. Of course, it wouldn’t be any fun if he simply used the tune as is, so generally it’s played around with, transformed, masked and varied. It’s going to increase your enjoyment exponentially if you just take a second to listen to the hymn, and try to hold that first phrase in your mind’s ear (Di-es ir-ae, di-es il-la), in particular those first four notes will become a really important motif all throughout the piece. Hum those first four notes a few times. I’m serious. Nice and slow: Di-es ir-ae.

I personally really like motivic pieces like this (ie. a motif or theme gets reused and reworked throughout the entire piece) because it kind of trains your ears to hear and recognize and actively participate in listening to the music. It kinda feels like a treasure hunt, feeling kind of satisfying when you discover a new instance of the same old motif in some disguised way.

Okay, on to the actual music!

On to the actual music

Just for ease of reference, I’ll be referring to timestamps that go with this particular recording that I happen to like.

The piece starts with a very sombre, subdued theme in the basses. There is no real melody or harmonic movement. In my mind, we’re amid a misty sea, with nothing to catch our eye just yet. Notice the off-kilter rhythm in 5/8 that’s throwing us off balance, as trying to stand up in a boat with the waves lapping against the bow arrhythmically. Rachmaninoff’s really trying to mess with us, changing around the strong beats in the 5/8 rhythm as well (it constantly changes from one-two-three-four-five to one-two-three-four-five, even to one-two-three-four-five). For the first two-ish minutes, this “wave-motif” is all we get to hear (and “see”). At about 1:50, the first hints at the Dies Irae motif start appearing here and there. Pretty cool how it seems to rise out of the background “waves”. It’s not just an exact quotation of our Dies Irae phrase. Instead, the first couple of notes are vaguely spelled out, just enough to give us a queesy feeling. Maybe we’re seeing a vague outline of an island apear through the mist from time to time.

This keeps going for a couple of minutes. I’ll let you make up your own story of what you feel is going on, with the interplay of the waves, mist and vague ominous glimpses of death. One particularly striking (and haunting) moment, to me, occurs around 5:15. This is the first time the piece moves to a major key, as the strings suddenly soar up into what seems like the start of an uplifting melody. It’s as if, finally seeing the island in full, we are relieved to see land, overgrown with trees and life, perhaps overjoyed to be saved from the gloomy misty sea. But, just as soon as we are taken with this positive feeling, our hopes turn to ashes as the soaring melody transforms into yet another, and clearer, eery statement of those four notes of the dies irae. It’s as if, as soon as we see the island, we are overcome with a feeling of despair.

The piece continues along these lines, with a little climax, lots of brass, lots of bombast, around 8:30-9:00, which will come back from time to time. At around 11:30, the atmosphere changes, and the piece moves to a major key again with the same soaring melodies we briefly heard before and more lush harmonies. But there’s more to it. Not only do we move to a major key for a while, the key changes from the gloom of A minor to E-flat major, which is a tritone away. Basically, this new, hopeful key is musically speaking as far removed from the original gloomy key of death as one can go, diametrically opposed. What better key to represent someone thinking back on life and all its joys, perhaps, in the face of death. But, again, our reflections on life are drowned out, and with a deafening blow, we are thrown back into reality around 14:30.

In the following minutes, there’s a kind of struggle between the soaring strings and the ominous brass, coming to a violent battle around 16:00. I’m not sure “violent” quite covers the sheer brutality of it. Then, quiet. Nothing remains but those ever-present four notes of the dies irae. We slowly retreat and all we are left with is the lapping of the waves once again. As if to signify the end of the entire affair and the final victory of death over life, we are confronted, around 20:30, one last time, with the dies irae — this time in full, not just those four notes — in the cellos, descending into a slow, downward spiral.

There you have it. I hope that didn’t put you in a gloomy mood. I hope I managed to get across how much depth, nuance and variety Rachmaninoff manages to put into a piece that, on the face of it, is simply about gloomy death.